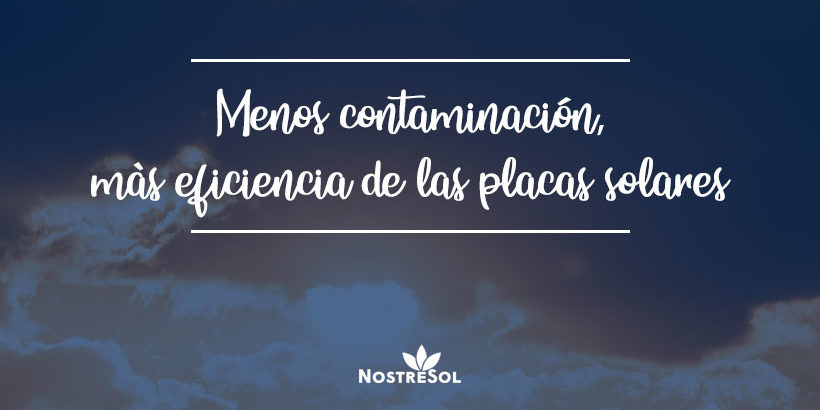 We have already heard on several occasions that, during the months we have been confined, the level of global pollution has dropped markedly. The lockdown measures taken to prevent the spread of Covid-19 have made the heavens look clearer and cleaner around the world. This is why solar panels have produced more energy during confinement.

The fact that the sun “has shone calmly” during these months has increased the level of effectiveness of photovoltaic plates. This is the conclusion of a study conducted in Delhi, India, in confinement since the end of March.

The study also showed that sunlight levels received from a solar panel in a residential area about 10 km from central Delhi were up to 8.3% higher than in previous years.

The reason this has happened is that, admospheric contamination can block some of the light that would reach the plates. At this point, it’s when it affects your electricity production capacity. In China, this had already been demonstrated, as they are the country with the highest production of photovoltaic energy in the world.

Confinement measures have snplored the use of cars and other combustion vehicles. As a result, pollution levels have fallen considerably. This is the case of nigrogen dioxide (NO2), for example, linked to motorized traffic. The reduction can be seen from satellites and from the ground at measuring stations. An analysis of EL PAÍS on data collected by the European Environment Agency (EEA) points to a reduction in NO2 in Spain’s 80 most populous cities of 51% in the first three weeks of confinement, compared to them in 2019.

With all this, it has come to the conclusion that the reduction of air pollution and air cleanliness make sunlight pass stronger through the atmosphere. This increases the performance of solar panels.

So, in Nostresol, we invite you to carry out responsible living habits with which, among all, we manage to maintain these levels of pollution and even lower them even further. Now that we can start dating again, our responsibility is not only in terms of security against the pandemic. But we must also be aware that the Earth has “relived” while we were locked up.