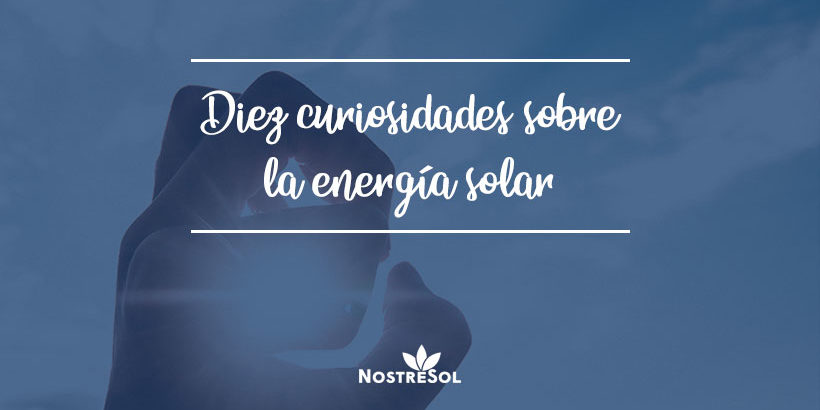 It has been shown on numerous occasions that having photovoltaic panels helps save money on electricity bills, while taking care of the environment. But what else do you know about this energy source? Read on to discover 10 curiosities about solar energy!

As we already know, solar energy comes from an inexhaustible source. This is why it is the renewable source of the present and the future. In addition, more and more homes are decided by solar self-consumption and more cities and governments make it easy to install photovoltaic panels.

Light is the fastest element in the universe

Albert Einstein, in the Theory of General Relativity, indicated that light travels at 299,792,458 meters per second. In addition, subsequent studies analyzing the rotation of 5 supermassive black holes concluded that these barely reached 70% of the speed of light. This occurs because the light, composed of photons, has no mass, and therefore its weight is 0, which explains its high speed.

Because photons behave like waves, we can observe phenomena such as refraction. But, being particles, they also act with matter and are therefore able to transfer energy in any form of electromagnetic radiation. This includes gamma rays, X-rays, ultraviolet light, visible, infrared light…

A photon only takes 8 minutes to reach Earth

A photon takes about a million years to get out of the sun’s core. Once your journey begins, the photon can be crossed with a number of electrons. When very close, the photon disperses in any possible direction. This aspect means that it can deviate millions of times before it can leave the core of the Sun, which is full of free electrons.

Once on the surface, things change. It will now only take 8 minutes to lay from the surface of the Sun to that of earth.

Einstein’s Nobel prize in physics was for the photoelectric effect

In 1905 Einstein was able to explain the photoelectric effect, the basis of photovoltaic energy. This effect explains that electromagnetic radiation is made up of energy packets, and that energy depends on the frequency of light. However, it was in 1922 that it was announced that the 1921 Nobel Prize in Physics would be awarded to Einstein.

A household consumes about 11,000 kilowatt-hours of energy a year

If we replaced the power source with photovoltaic panels, we would be saving up to 70% of the cost of bills, getting at least 4 hours of full sunlight a day.

If you could capture absolutely all the sunlight that hits Earth for an hour, the planet could be supplied for an entire year!

The first use of solar panels was to power space satellites

In 1957, the USSR launched its first space satellite, which operated thanks to solar power. A year later, the US did so. The U.S., whose satellite was also kept in operation thanks to this type of renewable energy.

Known as “rare earths” are a group of 17 metals with unique properties, which are used for the manufacture of solar panels. They also have other uses in the innovation and high-tech industry.

Most of these lands are located on Chinese territory.

A solar panel prevents the emission of 100 tons of CO2

With a lifespan of between 20 and 25 years, a solar panel can reduce contamination by up to 100 tons of CO2. After that period of time, solar panels continue to work, but their productivity may decrease.

This data is favorable for implementing photovoltaic solar projects that will be among the most efficient. For example, regions such as Guajira have 8.3 hours of radiation per day, which represents a high potential. Even Bogota, which has 4.8 hours a day of radiation, is enough potential to take advantage of in the industrial sector.

At Nostresol we love that you know everything about solar energy. Thus, you will have more reason to move to the more sustainable side: that of renewable energies.