You are here:
Eco zone 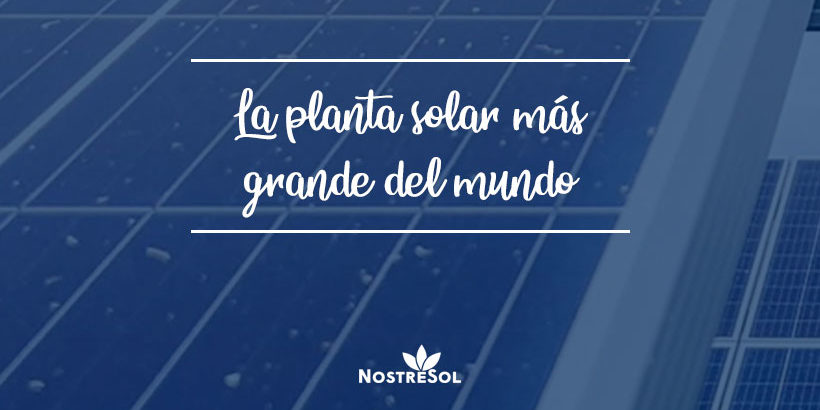 At Nostresol, we love telling you interesting things about renewable energy and sustainable attitudes. Today, we’ll talk about photovoltaic plants. In the middle of the Tengger Desert ( China), is the world’s largest solar plant, known as “The Great Wall of China of the Sun”. This plant covers more than 1200 square km of the territory.

In 2018, China installed so many plannels that they managed to generate power equivalent to 10 nuclear power plants in solar power. According to data from the International Energy Agency, 60% of solar panels are built in China that year.

China is known for its air pollution, but if it continues down this path, it is estimated that by 2040, half of this nation’s energy production will be from renewable sources. In the short term, detaching from coal is unworkable, but it is possible to do so progressively.

Of course, areas with strong sun incidence are ideal for installing solar panels. This is why deserts are one of the best places for photovoltaic plants, and China has a large number of them.

As we were telling you, the largest photovoltaic plant is in the Tengger Desert in Zhongwei, Ningxia. Its maximum production is 1547 MegaWatts, occupying only 3.2% of the desert.

During 2017, China’s total solar capacity reached 130 gigawatts. If produced at once, this amount would feed Spain several times.

The only problem in the Tengger Desert is the location. Ideally, the power generation of the photovoltaic plant should be close to the big cities that will consume it. This fact means that the solar plant cannot operate at full capacity all the time.

Tengger Desert Solar Park is included in the list of largest solar plants, with a power of more than 500 MW greater than the rest of China’s plants and approximately 200MW more than its main rival, in India. The latter are, for their part, planning to overcome the 2000MW barrier, rivaling Zhongwei Solar Park.

Another giant solar plant is Longyangxia Dam in Tibet. But its power is 850 MW, with 4 million solar panels. We therefore induce that the “Great Wall of china of the Sun” will have quite a few more.

In conclusion, China is the world’s leading solar market, but India intends to outperform the United States and second. And while in Spain we are still behind, China continues to generate millions of watts of energy through its gigantic solar plants in the middle of the desert. This should serve as an example in our day-to-day life to achieve a much more sustainable and ethical energy consumption among all.